NZTA Research in 2006 came up with a new type of two-lane roundabout with special narrow traffic lanes for a reduced speed environment of 30 km/hr for the benefit of cyclists and pedestrians.  Lanes are in the order of some 2.7m (8ft 10in), or 5.4m (17ft 8in) between kerbs for roundabout approaches, with circulating and departure lanes wider to allow space for manoeuvring.  Trucks and buses need to straddle two lanes as they approach the roundabout, and on-road cyclists can travel through as a car would by ‘taking the lane’.  Narrow lanes better enable speed control using the geometric elements of kerbs and central island, which can be a challenge when otherwise having to take into account swept paths for large vehicles alongside others.  Several of these ‘Cyclist-Roundabouts’ (or C-Roundabouts) have been successfully built in Auckland since 2009, and NZTA research in 2012 evaluated two examples to conclude they can work well and are a preferred solution by pedestrians and cyclists (although a fair proportion of car drivers would prefer regular width traffic lanes).

Below is a brief clip showing large and small vehicles using the C-Roundabout at the Sturges Road / Palomino Drive intersection in Auckland, New Zealand.

Below is a one hour clip showing morning peak traffic at the Seymour Road / Parrs Cross Road roundabout in Auckland, New Zealand, with traffic volume of around 30,000 vpd.  Note the use of narrow lanes by vehicles large and small (even one or two cyclists), and queuing behaviour – drivers often prefer to use the off-side lane rather than kerbside which feels narrower, but as queues get longer have less misgivings.

Below shows before and after aerial photos of the Margan Avenue / Hutchinson Avenue intersection in New Lynn, Auckland which was reconstructed with narrow lanes for less than $30K around 2008 (no kerb line adjustments were necessary).  For a substantial increase of intersection capacity, this represents quite extraordinary value for money.

Below is a concept for a 25m inscribed diameter Compact Urban Roundabout using narrow lanes with directional raised platforms rather than geometric elements for speed control.  The central island would be low or flush with the road surface. 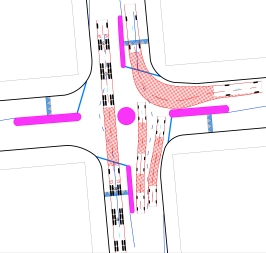 Below is a concept for a 35m inscribed diameter Compact Urban Roundabout with triple narrow lanes and directional raised platforms.  A triple lane arrangement has not been used in practice, so ideally would be trialled beforehand to assess operational performance.  A simulated example is shown here. 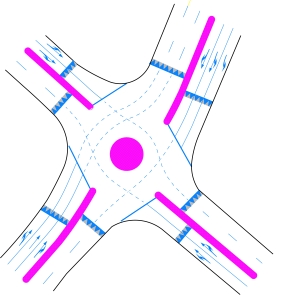 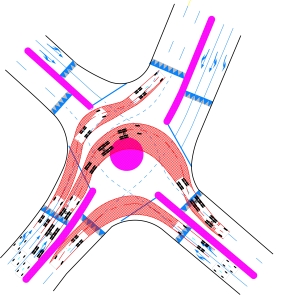